Poseidon® Barge, Fort Wayne, IN is playing a prominent role in the Chicago downtown improvements.  Chicago Steel approached Poseidon with the challenge of floating their Manitowoc 888 Ringer Crane on the Chicago River.  Chicago Steel is subcontracted by Clark Construction.

Clark was contracted to build the 54 story, 1.2 million square feet, 150 North Riverside Project, designed by Goettsch Partners, Inc based in Chicago. The new building is sandwiched between the West Lake Street and West Randolph Street bridges over the Chicago River in downtown Chicago.

The project parameters required that the crane needed to lift 33 tons using a 300 foot boom floating from a platform on the river.  The Chicago River has heavy commercial barge & recreational craft traffic requiring that half of the river remain open.  This requirement restricted the size of the crane platform adding another challenge to the project.  In addition, the crane and platform had to meet strict railroad safety parameters requiring a larger crane and lift capacity for the project.  The North Riverside building is being constructed over seven active commuter & Amtrak rail lines.  Chicago Steel & Clark Construction is using the crane to construct the lower floors of the building.  After completion of the lower floors, tower cranes will be assemble to complete the building.

The Poseidon® Barge engineering and sales staff met with Chicago Steel Engineers to discuss and plan the project.  Analysis determined that a 99’ x 132’ x 10’ platform would be suitable for the project requirements.  Two layers of wood mats and steel plating were installed under the crane to ensure spreading the load of the crane over the platform surface.  Stability analysis was completed to ensure that the list and trim parameters were not exceeded.

The platform was constructed using the Poseidon® P10 Portable Sectional Barges, first introduced at Con-Expo in March of 2014.  The platform consists of 23 – P10 44’ x 11’ x 10’ sections and 8 – 22’ x 11’ x 10’ sections.  The platform was assembled 4 miles south of the project site.  Chicago Steel used a Manitowoc 2250 crane to offload the sections from the truck and set them into the water.  A crew of three men assembled the barges in the water.  After staging the barges on land and blocking the female pins in the up position, the crew was able to assemble 5 – 44’ units and 2 – 22’ units in a 22’ x 132’ configuration in two hours.

Poseidon® Barge and Chicago Steel were assisted by Thatcher Foundations Inc.  Thatcher assisted with their tug boat as well as helping to install the one million plus pounds of counter weights on the crane at the construction site.  Kindra Lake Towing played an integral role in planning and moving the platform four miles upriver to the construction site, after assembly was complete.  The platform was moved on a Sunday morning to lessen the impact on traffic in downtown Chicago as bridges would have to be raised to allow the crane and platform to pass underneath.

Thank you to Chicago Steel, Clark Construction, Kindra Lake Towing and Thatcher Construction for their support of Poseidon® Barge! 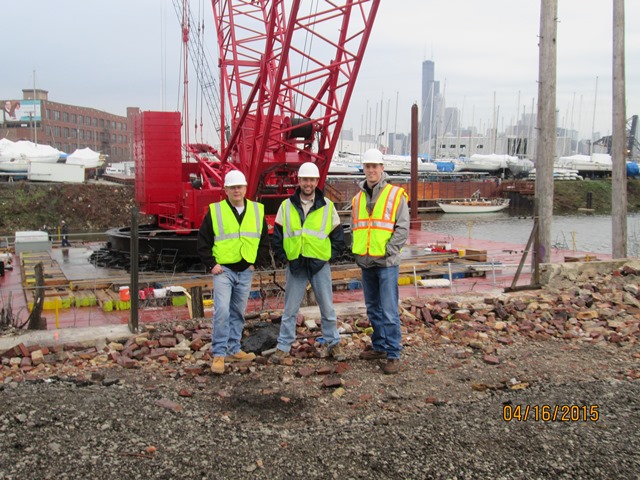 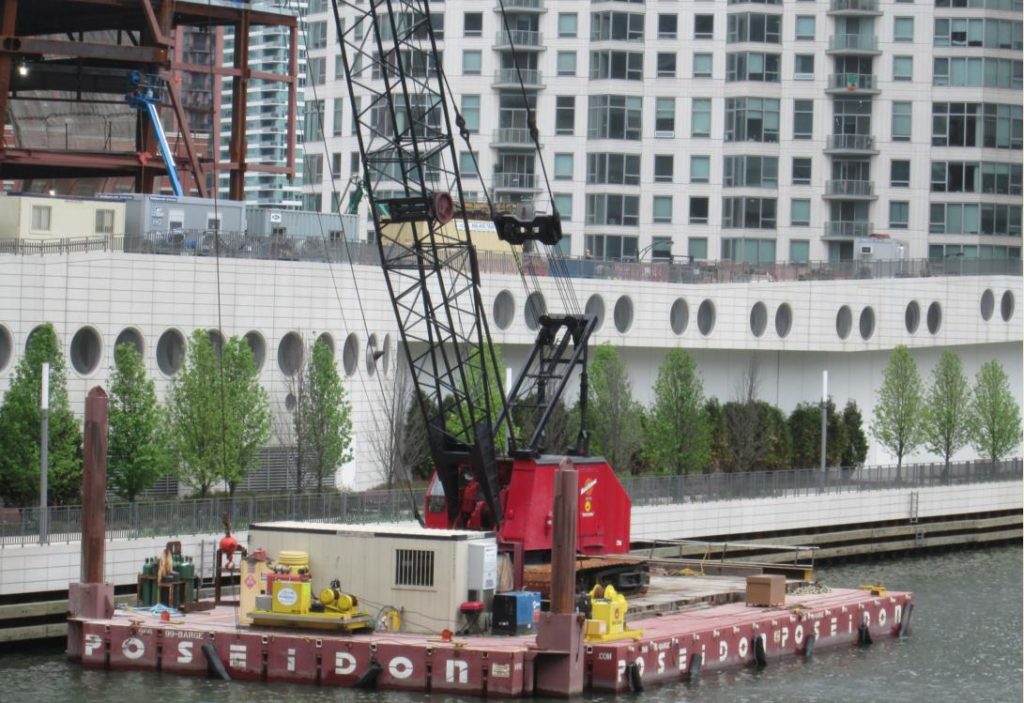